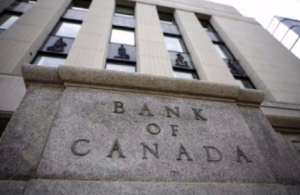 The Governing Council of the Bank of Canada raised its target for the overnight policy rate by 50 basis points today to 3.75% and signalled that the policy rate would rise further. The Bank is also continuing its policy of quantitative tightening (QT), reducing its holdings of Government of Canada bonds, which puts additional upward pressure on longer-term interest rates.

Most market analysts had expected a 75 bps hike in response to the disappointing inflation data for September. Headline inflation has slowed from 8.1% to 6.9% over the past three months, primarily due to the fall in gasoline prices. However, the Bank said that “price pressures remain broadly based, with two-thirds of CPI components increasing more than 5% over the past year. The Bank’s preferred measures of core inflation are not yet showing meaningful evidence that underlying price pressures are easing. Near-term inflation expectations remain high, increasing the risk that elevated inflation becomes entrenched.”

In his press conference, Governor Tiff Macklem said that the Bank chose to reduce today’s rate hike from 75 bps last month (and 100 bps in July) to today’s 50 bps because “there is evidence that the economy is slowing.” When asked if this is a pivot from very big rate increases, Macklem said that further rate increases are coming, but how large they will be is data-dependent. Global factors will also influence future Bank of Canada actions.

“The Bank expects CPI inflation to ease as higher interest rates help rebalance demand and supply, price pressures from global supply disruptions fade, and the past effects of higher commodity prices dissipate. CPI inflation is projected to move down to about 3% by the end of 2023 and then return to the 2% target by the end of 2024.”

The press release concluded with the following statement: “Given elevated inflation and inflation expectations, as well as ongoing demand pressures in the economy, the Governing Council expects that the policy interest rate will need to rise further. Future rate increases will be influenced by our assessments of how tighter monetary policy is working to slow demand, how supply challenges are resolving, and how inflation and inflation expectations are responding. Quantitative tightening is complementing increases in the policy rate. We are resolute in our commitment to restore price stability for Canadians and will continue to take action as required to achieve the 2% inflation target.”

Reading the tea leaves here, the fact that the Bank of Canada referred to ‘increases’ in interest rates in the plural suggests it will not be just one more hike and done. 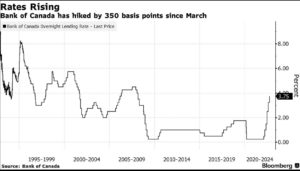 Consumer price index (CPI) inflation in 2022 and 2023 is anticipated to be lower than previously projected. The outlook for CPI inflation has been revised down by ¼ of a percentage point to just under 7% in 2022 and by ½ of a percentage point to about 4% in 2023. The outlook for inflation in 2024 is largely unchanged. The downward revisions are mainly due to lower gasoline prices and weaker demand. Easing global cost pressures, including lower-than-expected shipping costs, also contribute to reducing inflation in 2023. The weaker Canadian dollar partially offsets these cost pressures.

The Bank is expecting lower household spending growth. Consumer spending is expected to contract modestly in Q4 of this year and through the first half of next year. Higher interest rates weigh on household spending, with housing and big-ticket items most affected (Chart below). Decreasing house prices, financial wealth and consumer confidence also restrain household spending. Borrowing costs have risen sharply. The costs for those taking on a new mortgage are up markedly. Households renewing an existing mortgage are facing a larger increase than has been experienced during any tightening cycle over the past 30 years. For example, a homeowner who signed a five-year fixed-rate mortgage in October 2017 would now be faced with a mortgage rate of 1½ to 2 percentage points higher at renewal. 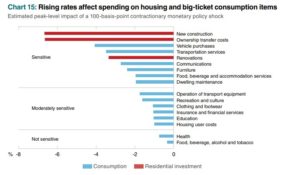 Housing activity is the most interest-sensitive component of household spending. It provides the economy’s most important transmission mechanism of monetary tightening (or easing). The rise in mortgage rates contributed to a sharp pullback in resales beginning in March. Resales have declined and are now below pre-pandemic levels (Chart below). Renovation activity has also weakened. The contraction in residential investment that began in the year’s second quarter is projected to continue through the first half of 2023, although to a lesser degree. House prices rose by just over 50% between February 2020 and February 2022 and have declined by just under 10%. They are projected by the Bank of Canada to continue to decline, particularly in those markets that saw larger increases during the pandemic.

Higher borrowing costs are affecting spending on big-ticket items. Spending on automobiles, furniture and appliances is the most sensitive to interest rates and is already showing signs of slowing. As higher interest rates work their way through the economy, disposable income growth and the demand for services will also slow. Past experience suggests that the demand for travel, hotels, restaurant meals and communications services will be impacted the most. Household spending strengthens beginning in the second half of 2023 and extends through 2024. Population growth and rising disposable incomes support demand as the impact of the tightening in financial conditions wanes. For example, new residential construction is boosted by strong immigration in markets that are already particularly tight.

A 50 bps rate hike is still an aggressive move, and the implications are considerable for the housing market. The prime rate will now quickly rise to 5.95%, increasing the variable mortgage interest rate another 50 bps, which will likely take the qualifying rate to roughly 7.5%.

Barring substantial further weakening in the economy or a big move in inflation, I expect the Bank of Canada to raise rates again in December by 25 bps and then again once or twice in 2023. The terminal overnight target rate will likely be 4.5%, and the Bank will hold firm for the rest of the year. Of course, this is data-dependent, and the level of uncertainty is elevated.

Fixed mortgage rates are expected to take another step up next week, pushing some 5-year fixed mortgages into 6% territory.

Five-year fixed mortgage rates typically follow the Government of Canada 5-year bond yield, which surged more than 40 basis points over the course of the week—briefly reaching a 14-year high on Friday—before retracing some of the gains. 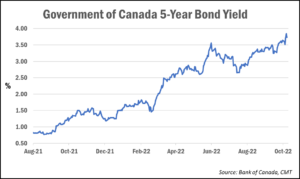 Why are bond yields rising?

According to Ryan Sims, a mortgage broker with TMG The Mortgage Group and a former investment banker, markets are reacting to the recent inflation data that came out of Canada and the U.S.

“Both readings were above a level that central banks are comfortable with,” Sims told CMT. That has raised expectations for future interest rate hikes, at least in Canada.

However, the sharp pullback in bond yields from their initial highs on Friday came following speculation the U.S. Federal Reserve is set to slow the pace of rate hikes following its November meeting.

“Usually when we see an intra-day move like we have today (without news, central bank speeches, or an “event”), it would signal to me that the top, at least for now, is in,” Sims said.

“This kind of intra-day volatility on any asset class is something that is usually marked by a lower high, and a lower low,” he added. “I’m not saying we see an immediate drop, but a slow march towards lower yields.”

What does it mean for mortgage rates?

Despite the midday pullback in yields, fixed mortgage rates are still expected to march higher by next week.

“Rates will increase next week just based on the large move-up in the last few days,” Sims said. “Uninsured [fixed rates] will start with a 6-handle, and even insured rates could be in the high 5’s without much work. You may get a lender who is trying to buy business that keeps rates in the mid 5’s.”

A number of lenders have already been raising some of their fixed-rated products since last week, including most of the Big 6 banks.

According to data from MortgageLogic.news, the average nationally available deep-discount rate for a 5-year fixed mortgage is now 5.57% (+15 bps since early last week), while insured rates are averaging 5.28% (+15 bps).

“Everyone should also remember that what comes up, can just as easily come down,” Sims added. “Short-term bond yields have started to roll over state-side, and that is signalling that the bond market thinks that maybe the central banks have gone too far and too fast.”

Steve Huebl
Steve Huebl is a graduate of Ryerson University’s School of Journalism and has been with Canadian Mortgage Trends and reporting on the mortgage industry since 2009. His past work experience includes The Toronto Star, The Calgary Herald, the Sarnia Observer and Canadian Economic Press. Born and raised in Toronto, he now calls Montreal home. 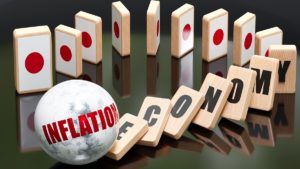 Canada’s headline inflation rate ticked down slightly last month to 6.9%, but measures of core inflation remain stubbornly high, and food prices hit a 41-year high. Lower gasoline prices were primarily responsible for the decline in inflation in the past three months. Bond markets sold off on the immediate release of the data this morning, taking the 2-year yield on Government of Canada bonds to over 4%. This is the last major data release before the Bank of Canada’s policy rate announcement next Wednesday, October 26, which puts the potential for a 75-bps hike back in play. At the very least, the Bank will take the overnight rate up 50 bps to 3.75%, but I wouldn’t rule out another 75-bps move. Judging from experience, we may see a nod in that direction by Governor Macklem before the Governing Council meets.

Excluding food and energy, prices rose 5.4% year-over-year (y/y) in September, following a gain of 5.3% in August. Prices for durable goods, such as furniture and passenger vehicles, grew faster in September compared with August. In September, the Mortgage Interest Cost Index continued to put upward pressure on the all-items CPI Canadians renewed or initiated mortgages at higher interest rates.

Monthly, the CPI rose 0.1% in September. On a seasonally adjusted monthly basis, the CPI was up 0.4%.
Average hourly wages rose 5.2% on a year-over-year basis in September, meaning that, on average, prices rose faster than wages. The gap in September was larger compared with August.

Contributing to price increases for food and beverages were unfavourable weather, higher prices for essential inputs such as fertilizer and natural gas, and geopolitical instability stemming from Russia’s invasion of Ukraine. 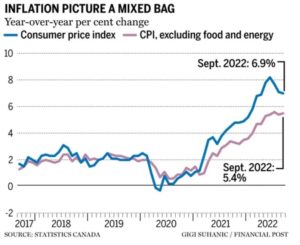 Price pressures might have peaked, but today’s data release will not be welcome news for the Bank of Canada. There is no evidence that core inflation is moderating despite the housing and consumer spending slowdown. The average of the Bank’s favourite measure of core inflation remains stuck at 5.3%. Combined with the Governor’s recent harsh rhetoric, the high probability that the Fed will hike rates 75 bps at the next Federal Open Market Committee Meeting and the weak Canadian dollar, there is no doubt the Bank will increase their overnight policy target to at least 3.75%, and could well go the full 75 bps to 4.0% next week. I would bet that they will not quit there, with further hikes to come in December and next year by central banks worldwide.

The Government of Canada yield curve is now steeply inverted, reflecting the widely held expectation that the economy is slowing. The prime rate will increase sharply next week, increasing variable mortgage rates again. Fixed mortgage rates will rise as well, but not by as much, continuing a pattern we’ve seen since March when the Bank of Canada began the current tightening cycle. We are unlikely to see a pivot to lower rates in the next year as inflation pressures remain very sticky. 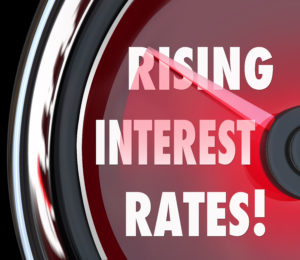 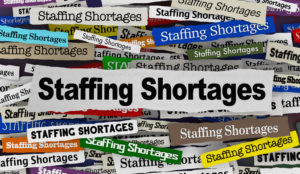 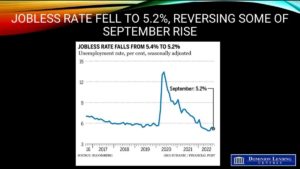