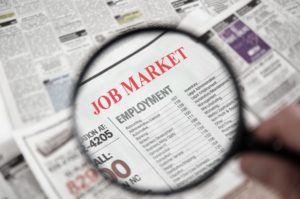 Statistics Canada released the March Labour Force Survey this morning, reporting a 72,500 jobs gain from the whopping 337,000 surge in February. Employment increased in both the goods- and services-producing sectors. Gains were concentrated in Ontario and Quebec. The unemployment rate fell to 5.3%, its lowest monthly rate since the data series was released in 1976, compared to 5.5% in February.

This adds more fuel to the notion that the Bank of Canada is behind the curve and will likely raise the overnight policy rate by 50 basis points next week. Indeed, Canada’s 2-year government note yield spiked on the news to 2.46%, up 2.38% at yesterday’s close.

Swap markets are now predicting a 75% probability of a half-point hike next week and an overnight rate of 3% a year from now. The overnight rate was 1.75% in February 2020, just before the pandemic began. Since then, inflation has surged from just over 2% to 5.7% in February. The March inflation data will be released on April 20, and it is widely expected to rise further. Indeed, the gauge of global food prices inflation is currently at a record high, exacerbated by the disruptions associated with the Ukraine war.

Adding to inflationary pressure is the rise in Canadian wage rates coming from the excess demand for labour. Total hours worked rose 1.3% in March. Average hourly wages increased 3.4% on a year-over-year basis, up from 3.1% in February. Illustrating the imbalances between labour supply and demand, employment gains since September (+463,000; +2.4%) have outpaced growth in the size of the population aged 15 and older (+236,000; +0.8%) during the same period. 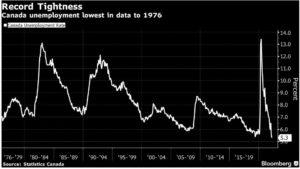 This Labour Force Survey was conducted in mid-March, after the February 24th start of the Ukrainian War. Since then, many commodity prices have surged, especially oil, gasoline, aluminum, wheat and fertilizer. This has boosted inflation worldwide, dampening consumer and business confidence and reducing family purchasing power. The Bank of Canada’s recent Business Outlook Survey shows that businesses expect inflation to continue for two years.

This view is predicated on the Bank of Canada tightening monetary policy significantly. All messaging from the Bank confirms that it will provide this by raising the overnight rate to around 3% over the next year and by quantitative tightening, reducing its holdings of Government of Canada bonds.